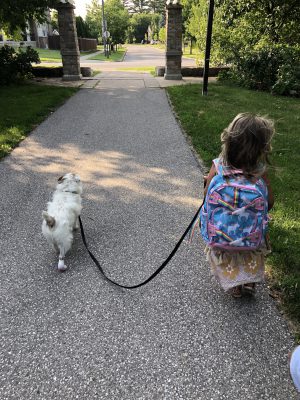 Dogs certainly get the short end of the stick in a household with kids.

Since becoming a parent, the daily act of walking the dog has become a whole other epic juggling act. Add a second kid and there was a period there where our poor Jack Russell Terrier, Ruby, did most of her business in the yard (or on my parents carpet). Then one day my son (newly walking at the time) started fishing out the leash and eagerly demanding we walk her. He loves holding the poo bag for us (perhaps because it’s the only time he’s permitted to handle a plastic bag) and tossing it in the garbage. Leni prefers the duty of holding the leash (and feeding her). We rarely go very far, but a few blocks will appease Ruby and get the kids outside. Plus, I suppose, they are learning the responsibility of pet ownership. Maybe it will come more naturally to them then it did to me.

We’ve been through many ups and downs with Ruby. We first fostered her with the goal to adopt through the Humane Society. She was around 5 ½ and we fostered her during her recovery from hip dysplasia surgery. This means she moved in, we administered her medicine, tended to her stitches, brought her to vet appointments and looked after her general care.

And fell in love with her, obviously.

They didn’t have a lot of details about her former life, but we do know they found her wandering near Kingston, Ontario with an intense flea situation (from which she still has scarring on her back). They later transferred her to the Toronto location when they had trouble finding her a home out there. For over a year we’d been visiting the River Street Humane Society intermittently, meeting new dogs and seeing if we felt a connection with one.

Then one day we met Ruby and took the leap.

Once she fully recovered from her surgery, we officially adopted. But, really, she was part of our family the moment we brought her home that first night. We started to notice early on (even during the foster period when all her vet costs were covered–hooray!) that she had some skin issues, which we later confirmed was caused by an allergy. To what? We still don’t know, to be honest. The financial cost of figuring out that an allergy was the culprit of her intermittent bouts of severe itching was pretty substantial. Add to that the specialty food and medications that followed. We definitely became pretty jaded about the whole vet racket. I know, I know, I’m sure they’re not all swindlers who pray on your emotions ok. At the moment, anyway, her skin is fine thankfully. We did, however, spend most of this past year trying to treat a stubborn infected toe from last summer’s camping trip. Never a dull moment.

When we met Ruby (then temporarily named Suzie and formerly some other name we’ll never know), her profile strongly recommended not bringing her into a home with kids. This was pre-kids for us, but we knew we’d have some one day in the vague and distant future. We shrugged it off. Thankfully for us, Ruby ended up being amazing with our kids. The worst knock against her is her propensity to bark when visitors come by (or occasionally when people pass the house), which has meant many interrupted naps (followed by tears and cursing from yours truly). But where it counts, she is a loving and patient fur-sister to our little brood.

She’s more inclined to exit stage left than growl when the kids are driving her bananas. Even when Leni would pull her fur (in the process of learning not to), she’d just slip away instead of reacting. Finn, thankfully, learned how to gently stroke her back much quicker. Another milestone in their burgeoning relationship came when Leni started solids. Ruby learned the true culinary joy of young humans in the home. The sun now rises and sets for Finn for that very reason. Leni is currently less inclined to drop half her meals on the floor so that honour has been passed down to her younger sibling. Points to Ruby for her vacuuming skills.

Even when Leni was first born, Ruby immediately needed to be close to her and often sat pressed up against her little body on the couch as I held her day and night in the early days. In fact, it really started when I was pregnant. Dogs just know, right? There was, however, a brief (and very stressful period) when out of the blue Ruby hurled herself on another small white dog of similar stature and gave a warning nip. I had wee Leni in the Ergo carrier and it was an absolute first in the couple years Ruby’d been in our lives. I knew she needed the exercise and the off-leash was so conveniently close, but it became off limits for a while there after one more incident (with another dog with a similar physical profile–what does it mean??) moved it from one-off to trend. We slowly re-introduced her to the park when Leni was older and we have never had such an experience since. The only thing we could come up with was that she was protective of her baby and felt somehow threatened by those dogs.

Now that we’re back in our old neighbourhood in our new home, it’s clear that Ruby knows this house sits in the same plot as the old. Dog spacial sense and intuition is off the hook, right? It wasn’t a minute before she found all her favourite pee spots and walking routes.

We actually took her to that infamous dog park just the other day and she led us there eagerly. When we arrived, Leni wanted to run around with her and a little crew of small barky dogs were aggressively following her and yapping. Ruby got right in there to protect her (once again), getting between Leni and the pack. There was a moment I worried about a repeat of her former behaviour of some four years back. Instead, she blocked their path, warned them with a stern bark and the little gang made the wise decision to immediately disperse.

Our guard dog. Always fiercely protecting her own pack.

We’ve done a lot of growing since we met our fur-child. We’re so lucky to have this loyal being on our side, with a seemingly bottomless well of forgiveness. She has such simple needs most of the time and yet they so often move to the end of the priority list. We’re still learning how to juggle everyone’s needs–often imperfectly–but I like to think we’re getting better at it.

No matter our flaws, I know I’ll be greeted at the door by her open face, tongue out and tail wagging.

One thought on “Our little guard dog, Ruby.”