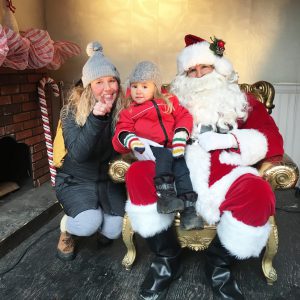 I’ve been having fun updating our Activity Advent for the upcoming holiday season. Frankly, we are already in deep. Between the Santa Claus parade, Christmas market, carol-listening, crafting and gift planning, this is beginning to look more like a 2-month-long holiday extravaganza. I’m loving it!

There are so many more things we can do this year now that Leni is on the other side of two. I also feel like I have a better idea of what activities worked best last time so that’s helping me get a little more creative this year. One of our activities is making ornaments for the tree. This year I scoured Pinterest and decided on some salt dough stars. Growing up, our family tree was covered in handmade dough ornaments, but somehow I never knew just how easy they were to make (or how nostalgic I’d feel getting a whiff of the dough). 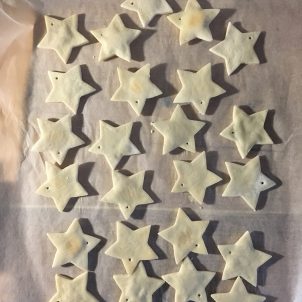 Roll the dough, cut out whatever shapes you like with cookie cutters, and poke holes for the string/ribbon (I used the narrow end of a chopstick). You can leave them to dry until they harden (24 to 48 hours) or bake them in the oven at 200F. I opted to bake mine (because: impatient). A few recipes I found said to leave them in for 2 hours, but my oven tends to cook hot and uneven (basically everything you don’t want an oven to be) so I checked them after 60 minutes and then flipped them. I’m glad I did because the holes were smaller on the other side. I re-poked them while the dough was still a little pliable and then baked them for another 30. They puffed up a tad and a couple turned slightly golden in the centre over that first hour, but I like the way they look and I knew we’d be painting over them anyway. Having said that, I cooked the second batch 15 minutes a side and then let them sit for a few hours until they were completely hard and they were pretty similar to the first batch. Slightly less puffy. Slightly less golden. This recipe made 48 small star ornaments altogether (approximately 2.5 inches wide, about 1/4 inch thick) and I still had a bit of dough left. I basically made what I could fit on my baking sheet. 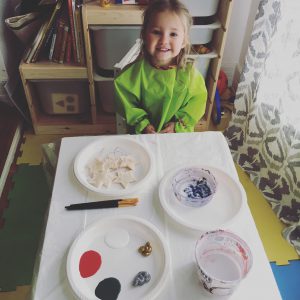 To decorate, I set out some glitter paint (gold and silver), acrylic paints (white, green and red), fresh brushes and sparkly snowflakes. I also added some glue (for the snowflakes), an option of gold, silver or red wire for hanging and some little bells to add to the ornament from a stash I got last year. I’ve learned that it’s always a good idea to control the palette with messy crafts. Your child will inevitably choose the poo brown or mix all the darkest shades until they don’t resemble anything if you don’t lock it down. Or at least that’s been my experience. Thankfully, she’s not quite so inclined to stick everything in her mouth anymore so it felt safe to use acrylics this year, though they are more challenging to wash off. And you definitely have to cover anything in the vicinity you don’t want glitter bombed. I recommend keeping some wipes nearby too. But who am I kidding? I’ll be finding those sparkly snowflakes all over the house for the next year. 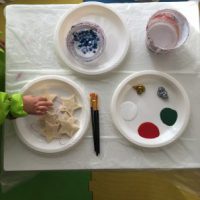 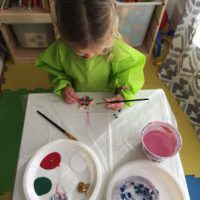 When we were ready to go, I put on some carols, stripped the peanut down to a smock and undies and let her get creative! The Activity Advent technically doesn’t start until December, but there’s no reason we can’t do this again. Thirty minutes and 3 ornaments later, she was ready to move onto something else anyway. In fact, I purposely made a large batch so we could keep some for our tree, save some for future crafts when her little friends (and my big craft-minded friends) come by over the holidays and make a bunch for gifts. We are using some that double as gift tags for her teachers. Believe it or not, between music, ballet and nursery school, we have 10 teachers and helpers on our list.

To seal the ornaments, I brushed some matte gloss over them after they had dried and it left a nice shiny finish.

The results? Pretty darn cute, if I do say so myself. (Though the peanut wasn’t too pleased I wrote on the back!) 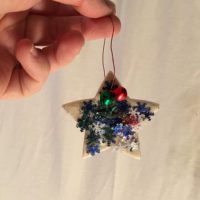 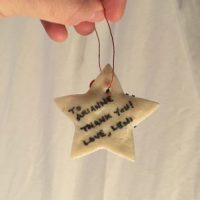 And here’s the fully assembled gift for one of her instructors (also Pinterest-inspired). A festive hand soap from Bath and Body Works, a candy cane and an ornament gift tag designed by Leni. I love this idea because you can buy and make everything in bulk, but it’s still personalized with the ornaments. 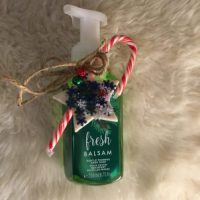 One thought on “Holiday crafting: ornaments.”