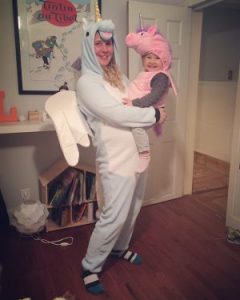 Leni has quite a few catch phrases of late. When I tell her our plans, particularly if I state them with some enthusiasm, she’ll often say, “ooh that’s a great idea!” Thanks, kiddo. Another response is an excited intake of breath followed by one question: “can I come?!?” I love when she asks me this because, well, she typically comes everywhere with me by default and yet still finds it necessary to confirm. Occasionally she’ll even tell me unprompted that she loves me “so much.” That’s pretty much the best.

She likes to copy the way I chat with friends when they’re over, usually inserting some inventive words alongside her favourites. Halloween costumes and umbrellas were hot topics this week. When she really gets going on one point of discussion she’ll wave her hand to emphasize each word. She typically forbids any conversation around her during these veering monologues. Funny, she often feels particularly inspired to share her wisdom when we have guests over.

One of her favourite games is the “I’m going to work game.” I’m a fan of this one because it usually requires very little of me and she give me hugs and kisses repeatedly when she’s “leaving” for work. She says, “I’m going to give you a great big hug.”

At the end of the summer, the smoke alarm went off at our friends cottage while we were cooking and since then she has become obsessed with locating the smoke alarm in every store, cafe, home, and building we enter. It just so happens we have this smart smoke/carbon monoxide detector above her bed too. When you turn off the light in the room, the device lights up momentarily. This has now become the cue for lights out at bedtime. She’ll say, “ok it’s time to say goodnight to the smoke alarm” or we’ll suggest it when we’re winding up the night time routine.

She likes to introduce her family now and knows to say her name and age when people ask. Apparently when she went to the museum with her dad a couple weeks ago while I was having my hair done, another mum asked her name and she said, “I’m Leni and this is my daddy and my mummy is at the hairdresser.” Ha!

She is still struggling with “sharing,” but has definitely shown a lot of improvement. She really responds well to turn-taking and sometimes is open to splitting half a toy (if it’s say, blocks or something with multiple parts) without a ton of fuss. I’ve been focusing on that when negotiating the peace. Sometimes she even finds some middle ground all by herself. I’m guessing nursery school is helping a ton. On Friday when we left our friends house, she asked if she could have them over and “share her toys,” so that’s progress, right?

Probably my most Canadian quality is that I apologize incessantly. As a result, Leni also says she’s sorry constantly and unnecessarily. It’s so odd when you hear yourself in your kids. It’s one thing with the good stuff, but it’s hard not to reflect a bit with something like that, which sounds so silly coming from a little muffin. I mean apologizing when it’s warranted is great, but just apologizing reflexively is sort of awkward. She also recently started to drop more frequent f-bombs. Quick segue-way, there. I’ve told her to stop and I’m trying to as well, but we’re both kind of amused by a well-placed swear, so I’m not sure my authority holds much weight on this one. The other day she was fighting her nap (again—this has been happening with terrifying regularity), singing every song in her arsenal and calling out that she was “ready to wake up” (despite never having slept). After being ignored by yours truly for the good part of an hour, she changed her strategy, taunting: “Mama! Mama! I’m saying fu-uck!” You have to give her points for creativity!

We’ve been talking about the baby with Leni, of course. She has taken to stuffing her blankie up her shirt and pretending she is also with child. She really gets a kick out of making everyone giggle. Last week when I went into her room in the morning her first words were, “where’s my baby brother?”

On that note, here’s a little update on the growing bump. He’s still kicking like crazy all day and night. Before it was just the lower part of my abdomen, but he’s filled out and will punch my belly button while kicking my bladder simultaneously. I know with Leni I could watch the undulations in the eighth or ninth month, but I only just entered the third trimester on Friday and I’ve been seeing the ripples when he’s moving for a few weeks now. Very cool. And comforting, really.

I’m starting to think more seriously about all the things we may need for baby number two. It’s a much shorter list than with Leni, of course. We definitely have a better gauge on what we will actually use this time around. Plus, we have so much already! I’m still trying to purge as much excess as possible before baby arrives, too. Hard to imagine when we’ll have time to do that again once there are two little ones dividing our attention! Oh and have I mentioned we’re likely rebuilding our house in the spring? Kind of hoping to get as much prep done for our exodus before baby comes. But, you know what? Even if I can’t get everything I’d hoped done prior, I know it’ll be ok.

And now that Halloween is over, I’m already focused on Christmas like an obnoxious mall display. Hey, I’m just trying to get ahead of it! Hoping to DIY my way through most of it this year, if possible. That way I can maybe just focus on the fun, magical side of the holiday (hello activity advent!) and not the stressful, wallet-straining side. Here’s hoping!