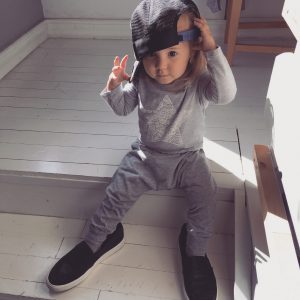 My wee lass turned two on April 6th. How the hell did that even happen? I found myself grasping for words when I considered my post to mark the occasion. I thought and thought and over thought some more and then I wrote…nothing. Actually that’s not entirely true. I wrote several things, but nothing made the cut. Add that to my deeply over-analyzing this blog recently, getting caught up with L’s birthday and traveling to Vancouver alone for an entire week and the result is a perfect storm for blog neglect. But I’m here now! Hello! And I’ve been doing a lot of reflecting…

Looking back on the last two years and change, I can say with absolute certainty they have been THE most rewarding of my life.

I love getting to know the peanut with each new day. She never ceases to amaze me, that one. I’ve also had the pleasure of getting acquainted with the shape-shifting, ever-evolving woman I’m becoming in motherhood. And she’s not so shabby either.

I used to have this idea that I had to be the “right” kind of person first before I could be the “right” kind of parent. True, if I had become a parent sooner, I very likely would’ve been a different sort altogether. I probably would’ve been a tad more easy going and maybe a smidgen less responsible, among other things. Had I waited until I reached the pinnacle of readiness, of “right-kind-of-person-to-parent-ness,” however, I’d likely never have had kids.

In any event, it turns out self-improvement doesn’t have to end when you become a parent. Hooray!

There was just the teensiest not-so-rational part of me (maybe there still is) that thought any mistake I made as a mama would automatically mess up my little one irreparably. And, hey, that may in fact be true, but I’m a human being so mistakes are kind of part of the package. Still, it’s taken some (ok too many to count) severe episodes of intense mommy guilt to finally realize I had to forgive myself for sanity’s sake. Maybe even embrace the mistakes. See them as an opportunity to learn perhaps? Not saying the mommy guilt is gone, but it’s lessened with that acceptance.

Where was I going with this? Oh yes. I have found a lot of peace as the mama to my little babe. Certainly more than I had in those 30 years prior. It was not an easy road, but it was worth every last minute. I am just so damn grateful for my Leni Simone. Not only is she such an incredible person in her own right, she continues to teach me so much about who I want to be and what really matters.

I can’t wait to see where this next year takes us.