Engaging, suspenseful, haunting – Night Film is an eerie thriller that suspends reality and keeps your pulse racing. Warning: you may require a night-light.

On a cold October morning, the body of a young woman is discovered in an abandoned New York warehouse. The woman is identified as Ashley Cordova – the daughter of the famously reclusive cult-horror-film director, Stanislav Cordova. Though the death is ruled a suicide, veteran journalist Scott McGrath believes otherwise. As he begins to probe the circumstances of Ashley’s life and death, McGrath finds himself delving deeper into the mystery that surrounds the infamous director – often skewing the line between reality and the dark world of his films.

Driven by obsession and a lust for revenge, McGrath falls head first into Cordova’s entrancing and eerie world, with the help of two very unlikely strangers.

The last time he tried to expose the cult director, McGrath’s career and marriage were destroyed. This time he might lose even more. – Synopsis adapted from Goodreads

This is a fast-paced read with many unlikely twists and turns that will challenge your perception of reality – and boy is it scary. For some reason the synopsis did not send a red flag to this sensitive soul. Suffice it to say, there were a few sleepless nights where I cuddled a little bit closer to my Jack Russell.

As far as mysteries go, this did not disappoint. Each time a new clue was uncovered another followed suit, keeping you on the edge every moment. But, this is not your typical mystery. The clever technical choices differentiate Night Film from any other book I’ve ever read. The book integrates other sources and media right into the narrative, including Rolling Stone and New York Times articles, photographs, blog posts, user comments and police reports. In fact, you get to see the images of at least four characters; meaning actors were hired to portray the characters in the book. This mixed-media approach completely expanded the parameters of fiction for me. I suspect this will not be the last time we see this method incorporated into new fiction, though whether or not it’s not done as well is another thing altogether.

A couple of minor complaints: I didn’t always find the dialogue believable and I wondered a few times in the beginning why on earth McGrath allowed Nora and Hopper to tag along. I also didn’t really love the hints at some kind of sexual tension or interest between the 19-year-old Nora and the forty-something protagonist that snuck up later in the story. Not that I can’t understand why an older man would be tempted by a younger woman and who hasn’t had a crush on someone older, wiser or slightly unattainable? My issue here is that their dynamic did not seem to be heading in this direction and I felt slightly confused and betrayed when it almost did. It irks me when it feels like characters are thrown together simply to fill the romantic gap, as it were. It just isn’t always necessary. And this is coming from someone who has read every Marian Keyes novel ever written.

Still, Night Film is definitely worth picking up. Just try to avoid reading it too close to bedtime if you’re at all sensitive like me or expect some sleepless nights! 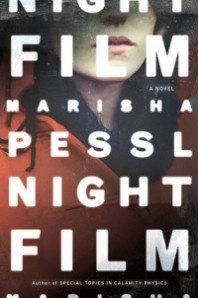