Poignant, heartbreaking, informative, a story about the plight of women in Afghanistan and the effect that one generation has on the next.

Afghanistan: 1960s. Mariam is the illegitimate daughter of her mother’s former employer. Her and her mother are banished to the outskirts of Herat, where her wealthy father, Jalil, lives with his three wives and ten (legitimate) children. Each week, Mariam waits eagerly for her visit from Jalil. Her mother scorns her for admiring and trusting this man who cast her out, constantly reminding her that she is no more than a lowly harami (bastard). On the eve of Mariam’s fifteenth birthday, she begs Jalil to take her to Herat and let her meet her siblings. When he doesn’t show, Mariam decides to go to his home and instigate the meeting herself. This decision will alter her life irreparably, ripping her from everything she knows and thrusting her into a new life in Kabul.

Kabul: April 27, 1978. The PDPA overthrows Daod Khan’s government in a bloody coup and Laila is born. When she is only two, her older brothers go off to fight and she is raised in their shadows by a mother who cannot see beyond their absence. In lieu of siblings, Laila builds a close bond with a neighbourhood boy who lost a leg from a landmine. As teenagers, that friendship will blossom into romance. Laila’s father — a former teacher who was forced into hard labour when the new regime took power — raises her to believe that despite her gender, she can be anything she wants and that education is paramount to her success. But growing up in a war torn and highly patriarchal society, will take Laila along a decidedly different path than her father had dreamed.

Spanning over 30 years of instability in Afghanistan and told through the eyes of two incredible women, this story is a raw look at the discrimination and atrocious treatment that so many women face there and the incredible courage it takes to persevere. This book will make you cry (a lot) and will probably frustrate the hell out of you, no matter where you’re from. I also found it incredibly humbling to think about what so many women cope with around the world every day. Definitely worth a read, but be warned, this book will both inspire the dormant activist in you and break your heart. 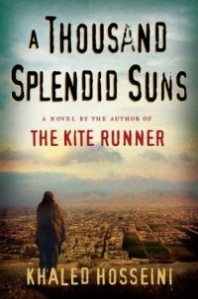 One thought on “A Thousand Splendid Suns by Khaled Hosseini”