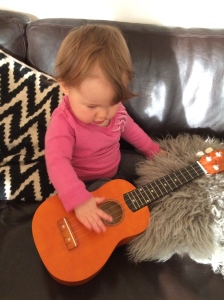 Until L actually got her first tooth, my husband and I were constantly speculating over anything we perceived to be slightly unusual behaviour. When she woke in the night or seemed fussy or particularly drooly we’d say, well, perhaps she’s teething. It felt so very abstract though. And our assessments became more and more unsure the longer she went without producing a tooth. Then one day, exactly 11 months into her life on this earth, Leni popped her first incisor. And just the other day, the neighbouring tooth made its debut.

Now that we’ve been shown real evidence that she is indeed teething, it’s a little easier to trust the signs. She’s really been struggling this past week in particular: up until late and then waking in the night, biting on anything she can get in her mouth (including me) and crying with frustration when it doesn’t relieve her discomfort. I picked up an amber necklace as apparently they can help soothe the aching. Sounds very new agey I know, but it does seem to be helping somewhat. I mean I think it is anyway. I take it off when she sleeps though. I’m giving her infants Advil for bedtime now (as it lasts longer than Tempra) and it does seem to help her relax. We also got her a finger tooth brush with little bristles and she really seems to enjoy the gum massage (I’m sure the apple and banana flavoured toothpaste doesn’t hurt either).

Even with achy gums keeping her up at night, she’s by no means miserable all the time. In fact, she is mostly too busy absorbing the world around her to notice I think. Her current focus is climbing the stairs (she is very determined) so we do that several times a day. Last week, a day after she discovered the stairs (I, admittedly, had been keeping her far away from them), we went to Sprouts and she climbed up the slide on her own. It was pretty cool actually. It’s amazing what little ones can do when you just step back and let them explore! (Don’t worry I was beside her through the whole thing!) And with the countdown to her first birthday now in the single digits, it seems like each day brings so many more new discoveries than ever before!